Trinidad: the second part of my trip to Cuba

Trinidad: the second part of my trip to Cuba

Beaches, history, and museums out of La Habana

La Habana, the subject of my first post, is the capital of Cuba, an incredible city in every way, but it is not the only one! There are several gems throughout the country and Trinidad is one of them.
A UNESCO World Heritage Site since 1988, Trinidad dates back to the sugar industry in the 16th century and preserves its colonial architecture with cobbled streets and beautiful mansions that have plenty of history to tell. In addition, Trinidad is very close to the coast and you can relax in the breathtaking Caribbean Sea. So, after experiencing La Habana, we went to Trinidad where we stayed for 4 days, including the New Year.

Located in the province of Sant Spirictus, Trinidad is 315 km from La Habana (check my previous post about La Habana here), which means approximately a 4-hour drive. We went by bus, with Via Azul, so it was a six-hour journey. The tickets are sold online, and it is advisable to buy beforehand if it is high season. There are many tourists traveling around the island and several prefer to travel by bus than renting a car with a driver. Buses are not very comfortable, but you do arrive at your destination, do not worry. It even has a stop to make a meal and go to the bathroom (put apart 1 CUC to pay for the toilet paper).
Regarding accommodation, it is also advisable to book in advance in the high season. Trinidad is a small city with a greater concentration of tourists than in La Habana. We stayed in the house of a couple recommended by Mercedes, our first host in La Habana. The room rate was 30 CUC for every single room. The house was simple and very clean. The hostess was waiting for us at the bus station with a huge smile on her face. Sympathy and joy go together with Cubans.

Walking around the historical site of Trinidad

Definitely, Trinidad is a walking city. With comfortable shoes, of course. In addition to the cobbled streets, it is not a totally flat city, so get ready to go up and down slopes, especially the stairs that are next to the Plaza Mayor and where the main point of the city’s wi-fi is. The first time I saw everyone sitting on the stairs looking at the cell phone it seemed like a movie scene, but it was real. If in La Habana it is difficult to connect, in Trinidad it is even more so. You’d better relax and get into the real digital detox wave. Let friends and family know that you will be disconnected for a few days. So nobody gets worried.
Trinidad has several attractions, among them, are the beautiful architecture of the Plaza Mayor, the heart of the historic center and the World Heritage site. Around it, besides the Church of the Holy Trinity, one can visit several mansions that previously belonged to the landowners, which today are museums and restaurants. Some of the restaurants retain the refinement in the furniture, including beds and cabinets of noble wood.
The windows of the mansions are a chapter apart. In different ways, colors and materials, they are huge, almost the size of a door. The colors of the windows contrast with the tones of the walls, coloring the city with joy and beauty. If on one hand, the streets of Trinidad describe a happy history, they also reveal a sad time of the colonial period, since the city developed and became one of the most important of the country due to the sugar industry and the exploitation of African slaves.

The museums of the City-Museum of Cuba

Known as the City-Museum of Cuba, Trinidad lives up to its name. There are several museums, most of them located in the city center: the Romantic Museum, Museum of Municipal History, Museum of Colonial Architecture, National Museum of Fight against Bandits and the Museum of Archeology. As it was a long holiday and Cubans like to enjoy life (which they know how to do very well), several museums were closed. I went only to the Museum of Archeology, where some stories of the time of slavery are exposed, which reminded me with a pain in my heart of a museum of my country: the Museu da Inconfidência, in Ouro Preto, where slavery was absolutely normal for 300 years…
Continuing along Trinidad, do not miss a visit to the former convent of San Francisco de Assis, which is located on Calle Cristo. Climb to the belfry until the end, the view is beautiful and bucolic. Keep an eye on the timetable because the steeple is not open during all the opening hours of the convent.

In Trinidad, you eat well and in restaurants from another time literally. It even has a restaurant-museum in a mansion that conserves not only the old furniture but also crystals and dishes: Paladar Museum 1514 (Calle Desengaño, 515).
Next to the main square staircase, there is also a very good, beautiful and pleasant restaurant-gallery: Los Conspiradores . In the house where the restaurant is located, besides the gallery, there is also a hostel with 9 rooms. I had lunch under a tree of pink flowers and began to read the book I had just bought: “Evocación. Mi vida al lado del Che“, by Aleida March, Ernesto Che Guevara’s life and fighting companion. To celebrate this beautiful story, I asked for a Cubanito, that is a bloody Mary with rum. Very good!
I went to several restaurants, but the most remarkable one was where we spent New Year: Sol Ananda (Calle Real del Jigüe, 45). The food was great, the service very good and the evening surprise was a very fun music show with an unusual moment: just before midnight a musician plays an instrument, mounted on a donkey! That’s right, a donkey!!! He walks through the front door of the restaurant, passing between the tables finely decorated, white tablecloths and drinking glasses. It was surreal! Obviously, then the animal left and the musicians stayed. And then we toasted: happy new year, everyone!!!
Restaurant Sol Ananda
But this episode was registered in my mind and I wanted to understand that event better. I talked to our hosts and they told me that this is a habit in town. Many people raise and keep animals at home. From a chicken to a horse. And since most houses have only one entrance, the animals enter through the front door until they reach the yard. Then I saw this scene happening a few times, even in the house where we were staying.

Celebrating New Year’s in a cave

After the theatrical New Year’s Eve we went to a nightclub that is inside a natural cave: Disco Ayala Las Cuevas. Amazing, but you can get there by walking as it’s 10 minutes from downtown. Just be careful with the unpaved streets and also not to get lost. As it has no indication, it is better to go asking the people who are on the street. The place is very interesting! When we arrived, it looked like the whole town was there, but the cave was very spacious and had room for everyone. Despite the heat, it was so much fun! Cuban and international music until late at night with tourists and locals dancing nonstop.
Another recommended place is Casa de la Música. Climbing up the famous staircases from the main square, you’ll want to find the house with live music almost every night. Unfortunately, it was closed the day we went there, but there was a concert there, in the staircases, on a stage that is halfway there. And there were the Cubans showing off all their ability to dance. Their energy is really impressive. We sat at one of the tables next to the stage and watched the whole concert for only 1 CUC. It was worth it.

We went to three different beaches, but my favorite one was Playa Ancón. The beach has that name because before there was a resort with that name. Remember that fine white sand with turquoise Caribbean sea? That’s there. With the advantage of being a safe place: you can go into the sea and leave your belongings unattended – nobody will touch them. At least that was our experience. The restaurants have simple food and an honest price.
Ancón beach is about 12 kilometers from Trinidad. You can go by bus, the all-day ticket costs 5 CUCs, and buses run every hour. But check this information in Trinidad as the frequency may have changed. If you are with more people, it is worth taking a taxi to get there. That’s what we did, we paid between 15 and 20 CUC. The more adventurous folks can rent a bike for 5 CUC, but beware of the heat …
We went by taxi. You can take a taxi near the bus stop. These are normal cars, and drivers often stand outside asking tourists if they need a taxi. You negotiate the value first with the driver, he will take you and pick you up at the time you set. It may seem strange, but it works. The cars are old, some of them are Russian, from the 90’s… But the roads are straight and empty, we had no problem on the Trinidad-beach route.
And so ends my trip to Cuba, taking a swim in the crystal clear blue water of the Caribbean and resting my feet on the fine white sand of its beaches.
Text published on the Trip Trip Now travel website in Barcelona: https://triptripnow.com/trinidad-cuba-unesco-heritage-in-the-caribbean-sea/#more-5909 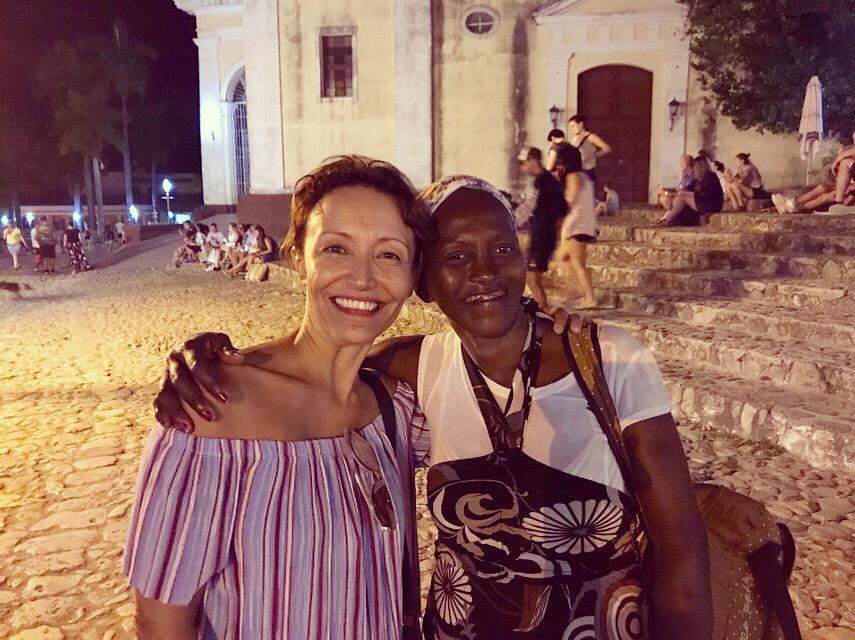 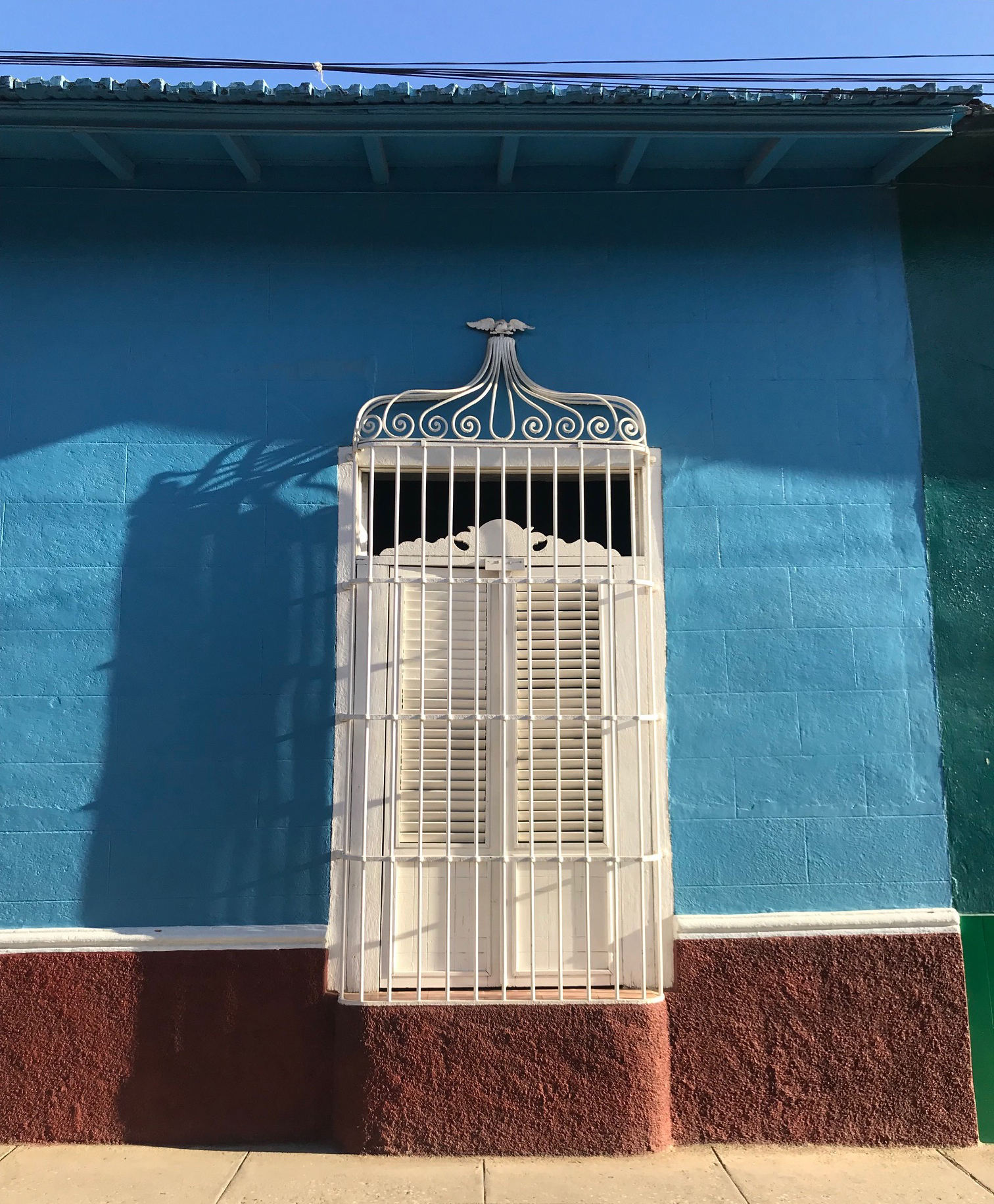