When I moved to Roger de Flor street, in Fort Pienc, in the Eixample Derecho neighborhood, I felt like I was moving to a different neighborhood from any I had ever lived in Barcelona. This happened in January 2016. And in a few days I already realized that I had moved to a neighborhood that was in a moment of transformation. A neighborhood with many restaurants, shops and Asian residents, but also a neighborhood that was starting a gentrification process, in other words, it was getting “hipster”, “cool”, and so many other adjectives that we can put here. A change that has its positive side, but also a negative one. Some typical restaurants closed to make way for more expensive, “trendy” ones. But the most interesting thing  was that Asian community reacted and started opening “cool” restaurants too.

The neighborhood began to change since the City Hall of Barcelona redeveloped the Passeig Sant Joan, completely modernizing the avenue to reflect a smart city. The space for cars halved and pedestrians gained more pavement. The sidewalks of Passeig Sant Joan have practically doubled in size, now with more greenery, trees, wooden playgrounds for children and outdoor tables. In the central part of the  “Paseo”, a new cycle path, also surrounded by green, that ends in the Arc de Triomf, a literally triumphant end to the avenue. In 2021, in a survey carried out by Time Out International Magazine on the best streets to live in from around the world, Passeig Sant Joan was voted the second best behind only to Smith Street, in Melbourne, Australia.

A free Airbnb experience for you

Of course, this new scenario began to attract new entrepreneurs in gastronomy, fashion and the like. And the traditional Asian restaurants, nail salons and shops began to coexist with new windows, cafes and cosmopolitan flavors. Interestingly, this shift attracted new, more modern and sophisticated Asians, who turned Barcelona’s Chinatown into a “Hipster Chinatown.” Needless to say, I identified with this new face of the neighborhood. Firstly, because I have a cosmopolitan spirit and secondly, because I do actually look a little Asian, so how could I not relate?

I started researching trends in the neighborhood that I affectionately now call  “Chinatown Hipster”. This research officially started in 2019, when I proposed a tourist experience for Airbnb with that name. The experiment was approved and they loved the idea. But unfortunately the pandemic came and I had to take a break from the project. Some stores closed, others appeared… The important thing is that life is still pulsating around here.

So let’s imagine that you are with me and I’m taking you on a tour of Hipster Chinatown, so let’s go: our itinerary starts at Plaza Tetuan and we go down Passeig Sant Joan to the Arc de Triomf, entering some perpendicular streets.

First stop: Takumi Tonkotsu Ramen, Gran Via de Les Corts Catalanes, 704, Plaza Tetuan. A super colorful restaurant, with those typical Japanese lanterns hanging from the ceiling and posters on the walls. The menu has different options, but the main course is ramen, a traditional Japanese soup. Among the colors and information is a small poster that tells the story of how Takumi Tonkotsu Ramen was created. The small details and flavors of each dish make this place an excellent starting point for our tour.

Second stop: Q Tea, Passeig Sant Joan, 44. A Hong Kong tea, dessert and sweet shop with very interesting flavors and some rather unsual tea names. The tea menu is divided into: Original Teas, Milk Teas, Fruit Teas, Teas from Popular Influencers. Among the fruit teas, the “Avocado Energy Drink” caught my attention. And among the Influencers, the tea “Bitter Love with Alcohol”, which is made from lemon, grapefruit and liqueur. The store has a teenager-style decor, with pink flamingos on shelves, poufs and white walls.

Third stop: Landscape, Calle Ausias Màrc, 53. A very elegant shop that offers cleaning, repair and painting services for leather goods (shoes, bags, belts, etc). The decoration is beautiful with several old sewing machines that I made a point of photographing and I was even photographed by the shopkeeper who made me feel very welcome.

Fourth stop: Lady Dumpling, on Roger de Flor street, corner with Ali Bei. It used to be the Gyosas Bar, a gyosas-only restaurant. After the pandemic, it underwent a renovation and is now the second Lady Dumpling restaurant in Barcelona. The first is on Calle Escudelllers, in the Gothic quarter. A more varied menu, with more space between tables and delivery throughout the city.

Fifth stop: Canton Food Restaurant. With wall paintings reminiscent of Chinese customs, this is one of the few Cantonese restaurants in Barcelona. Cantonese is a dialect of Yue Chinese, the official language of Hong Kong and Macau. But don’t worry, the menu is in Spanish and English. Cantonese is one of the eight main types of Chinese food. To make a comparison, the difference between Chinese and Cantonese food is like the difference between European and Italian food. You really have to try it.

Sixth stop: Yang Kuang Asian Supermarket, Passeig Sant Joan, 12/14. This is a classic and will stay with you forever. The best and most complete Asian supermarket in Barcelona is here. Get ready to find everything you’re looking for, even if you don’t understand what’s written on the packaging. All possible sauces, noodles, drinks, foods, dishes and kitchen utensils, come in for a good time. Here we buy the Chinese tea that we are going to drink at the end of this text.

Seventh stop: the Arc de Triomf. Why not? It is as beautiful or more than the Arc de Triomf in Paris (I hope the French dont’ mind me saying!!). Located between Avenida Lluís Companys, Avenida Sant Joan and Ronda de San Pere, it was designed by the architect José Vilaseca as the main entrance to the Universal Exhibition of Barcelona in 1888. The sculptural decoration was carried out by Josep Reynés, Josep Llimona, Antoni Vilanova, Torquat Tasso, Manuel Fuxá and Pere Carbonell. It was registered as a Cultural Asset of Local Interest in the Catalan Cultural Heritage Inventory. But what is even more important is that, the Arc de Triomf in Barcelona has a civil component, characterized by artistic, scientific and economic progress unlike other triumphal arches that are constructed predominantly for a military purpose,

Eighth and final stop: a Chinese tea on the balcony of the apartment where I live to rest the view looking at the city skyline. The apartment is “cosy”, but it has a 180 degree view of Barcelona that makes up for it all. On the left, the Sagrada Familia church, one of the main architectural symbols of the city. In front is Torre Agbar, an icon of the most modern architecture in the city. On the right, the Torre Mapfre and the Hotel Arts, the “twin towers” ​​of Barcelona. And, squinting a little, you can see a little piece of the blue Mediterranean Sea. This view is my daily therapy. And here we end our tour of Barcelona’s Chinatown Hipster. I hope you enjoyed it! 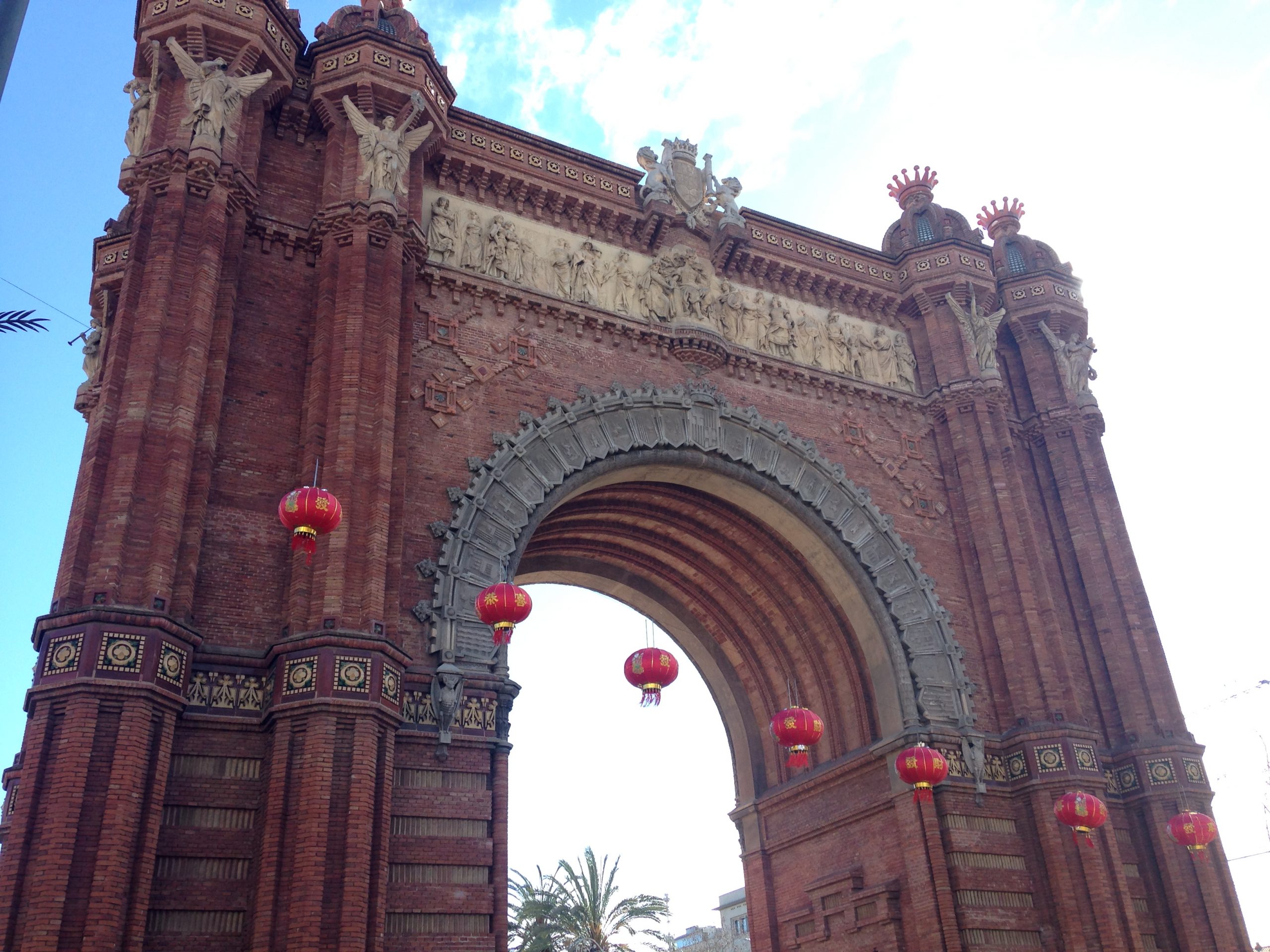 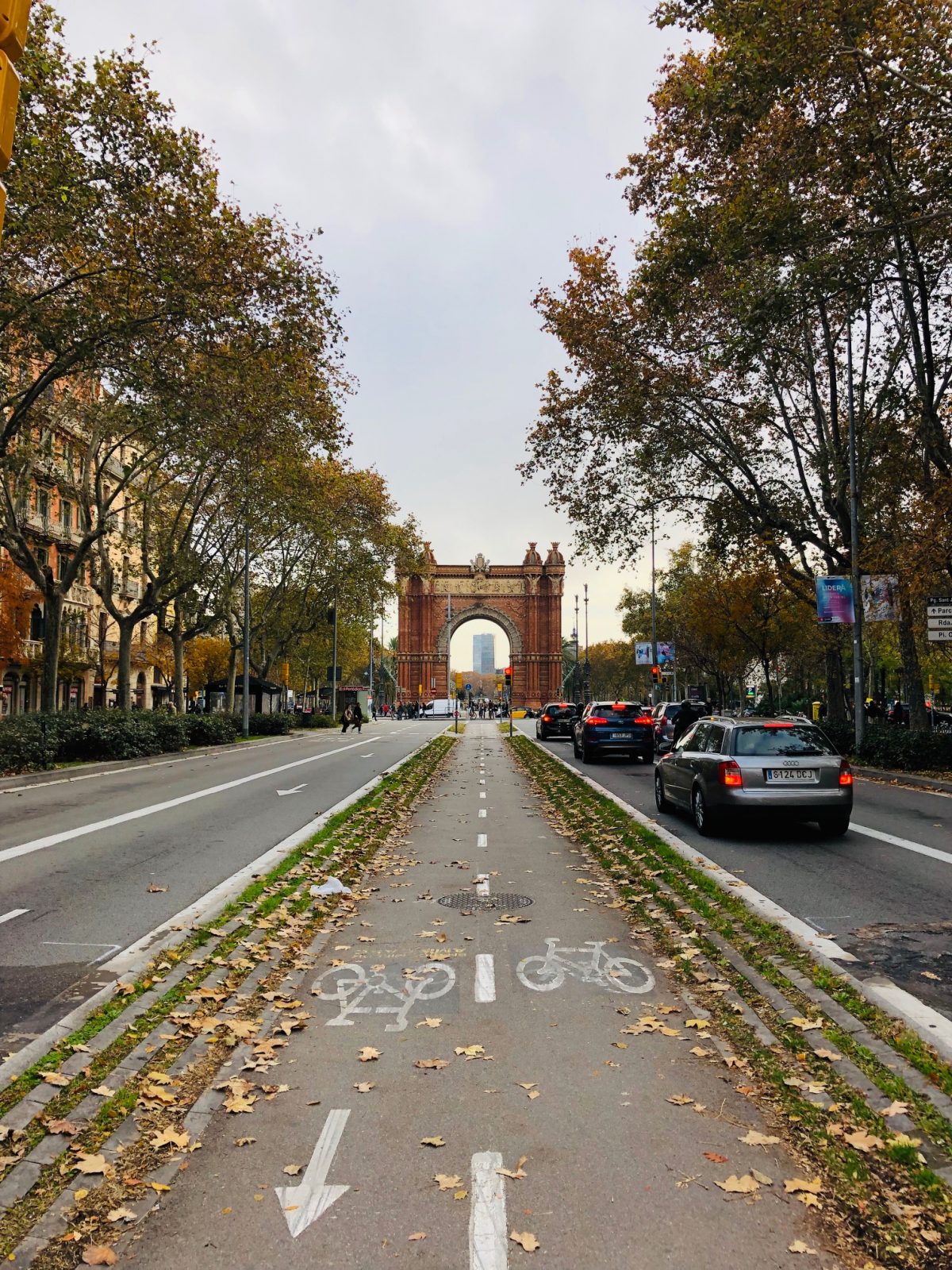 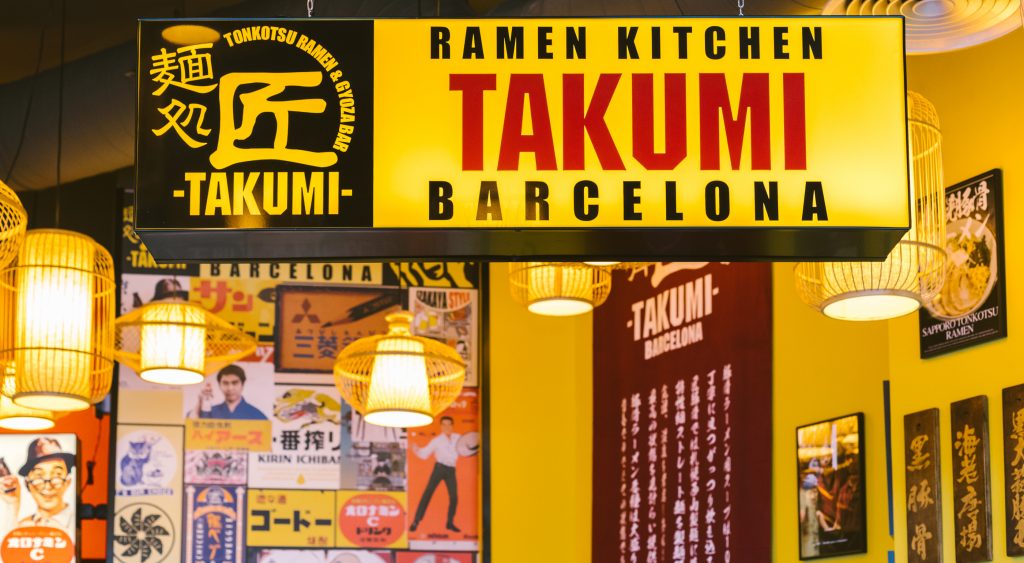 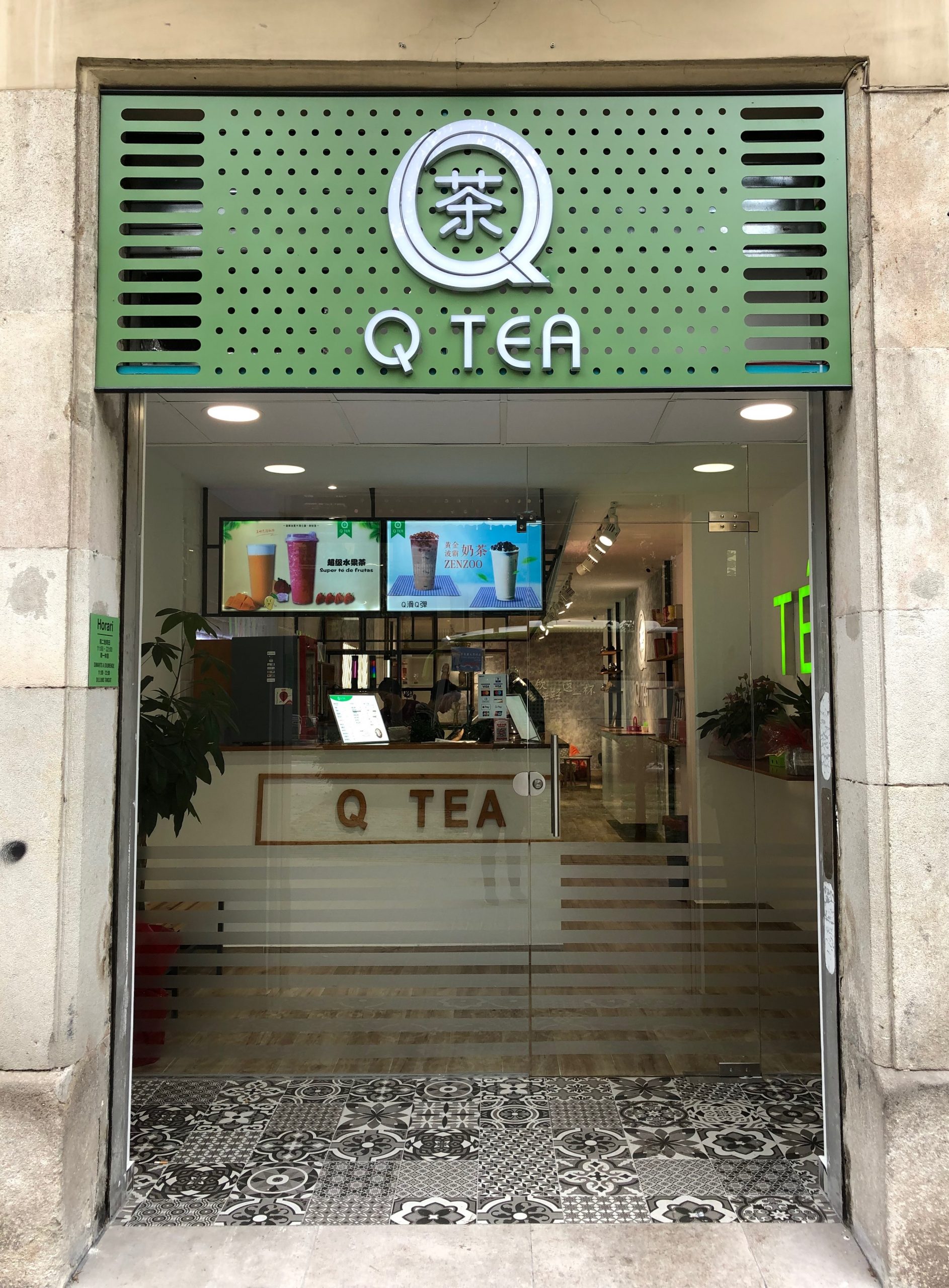 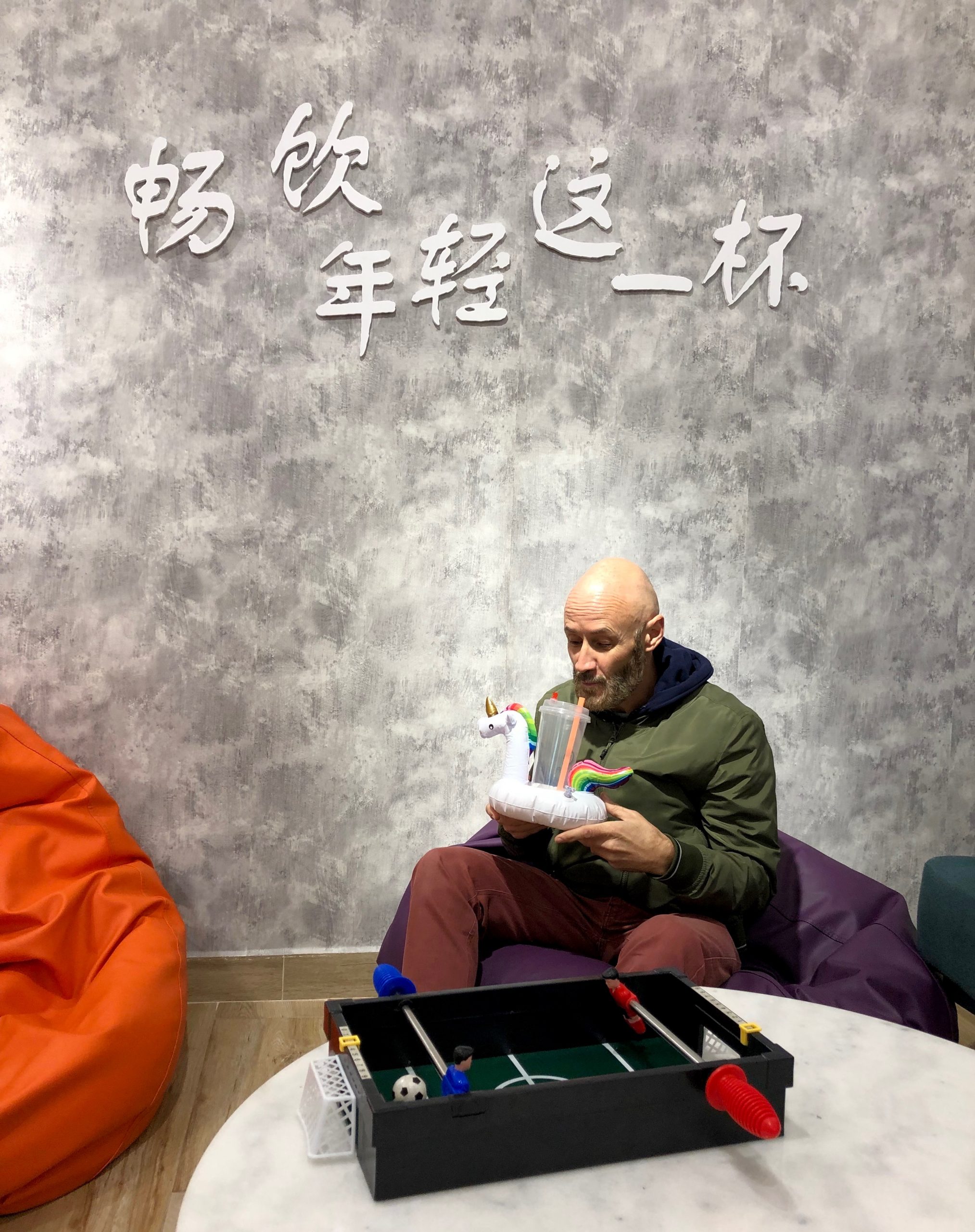 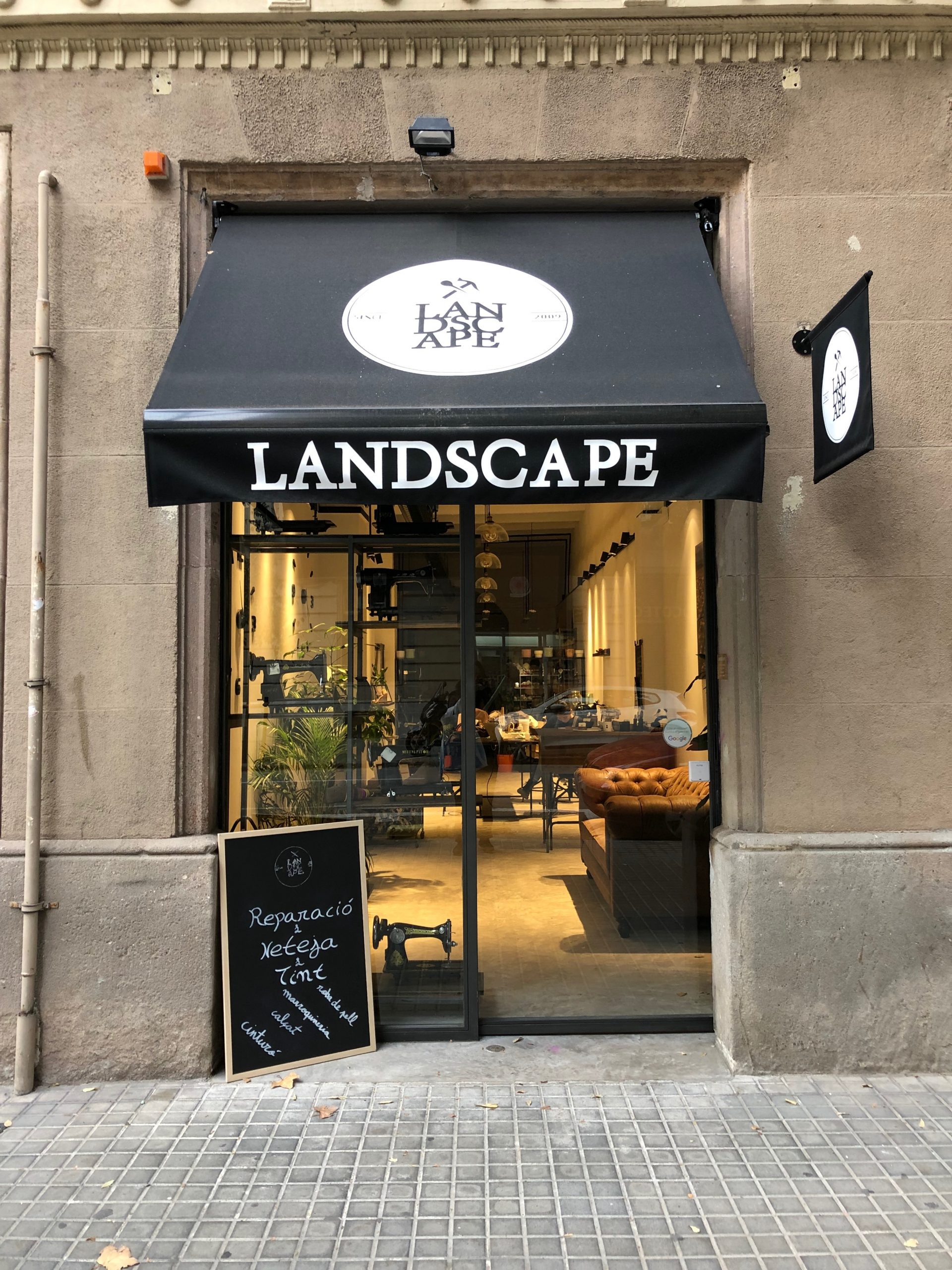 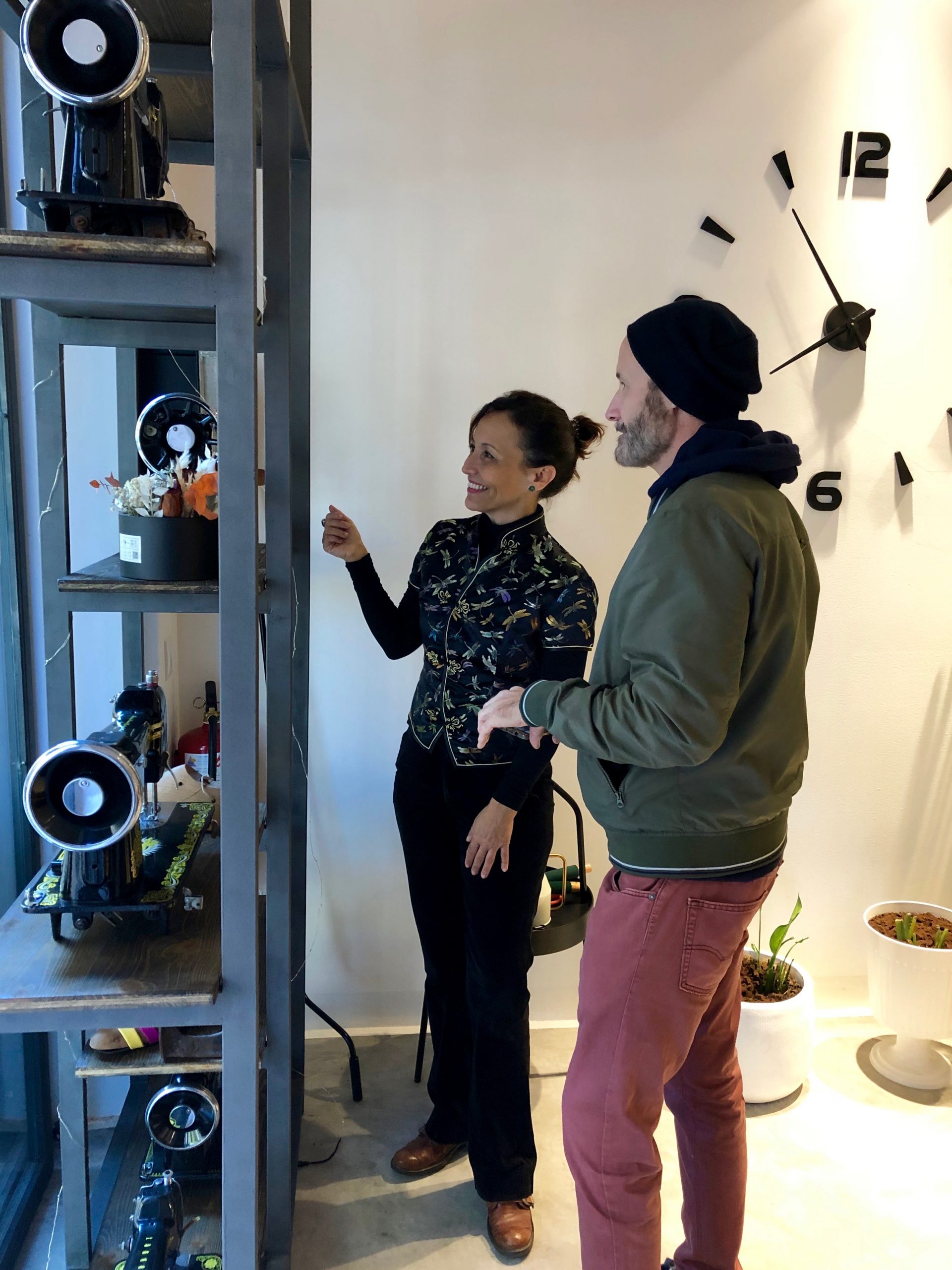 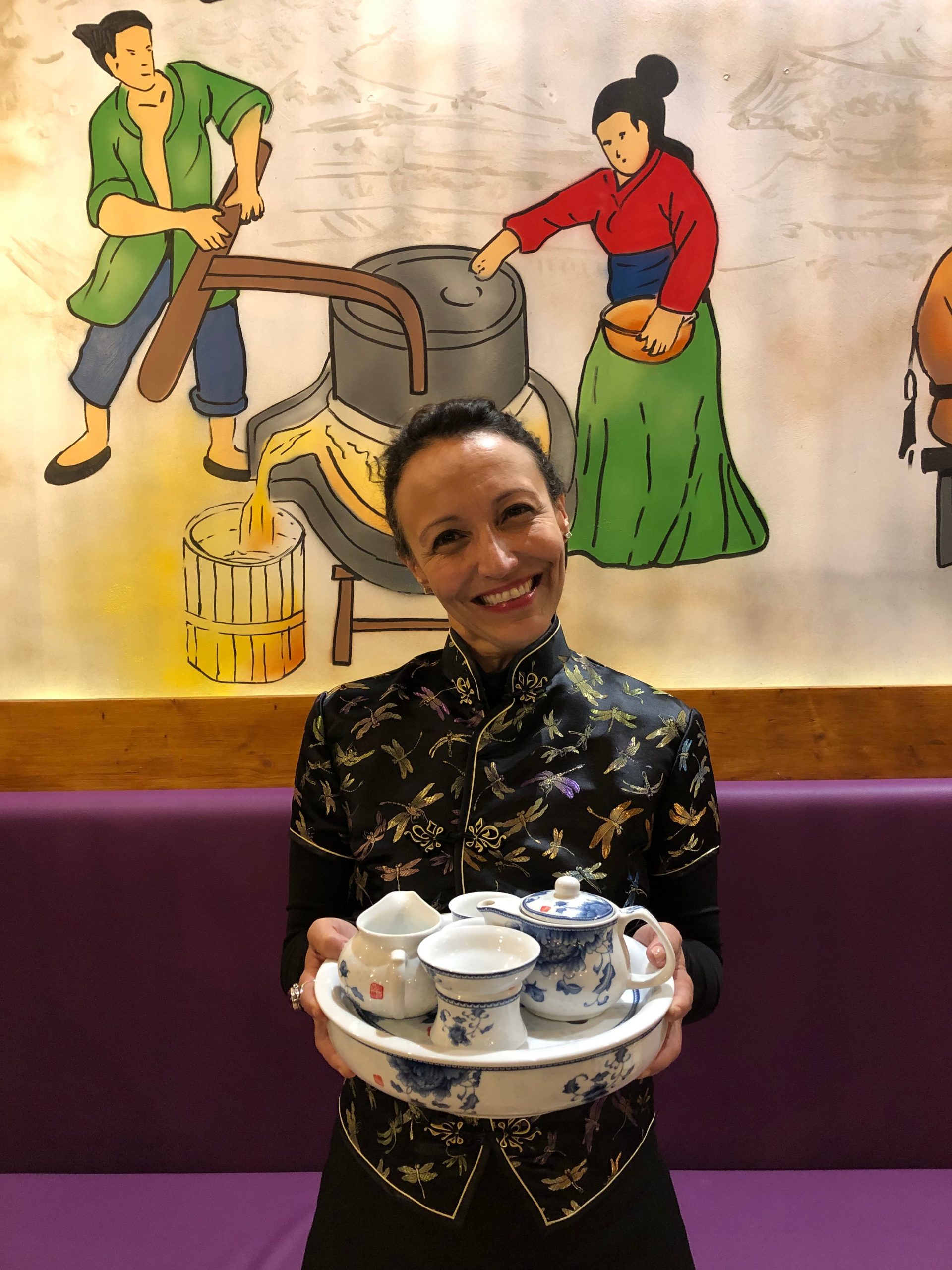 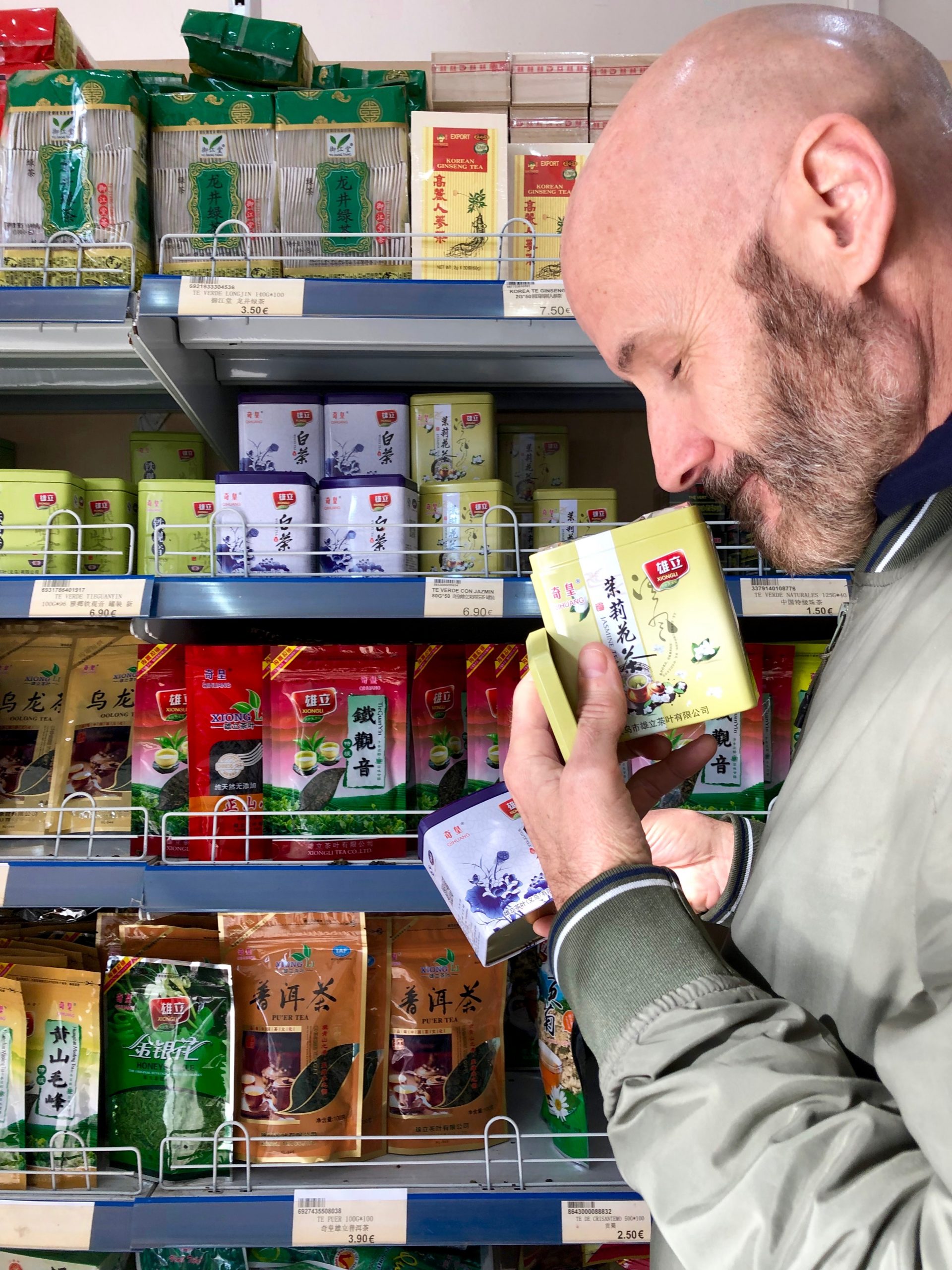 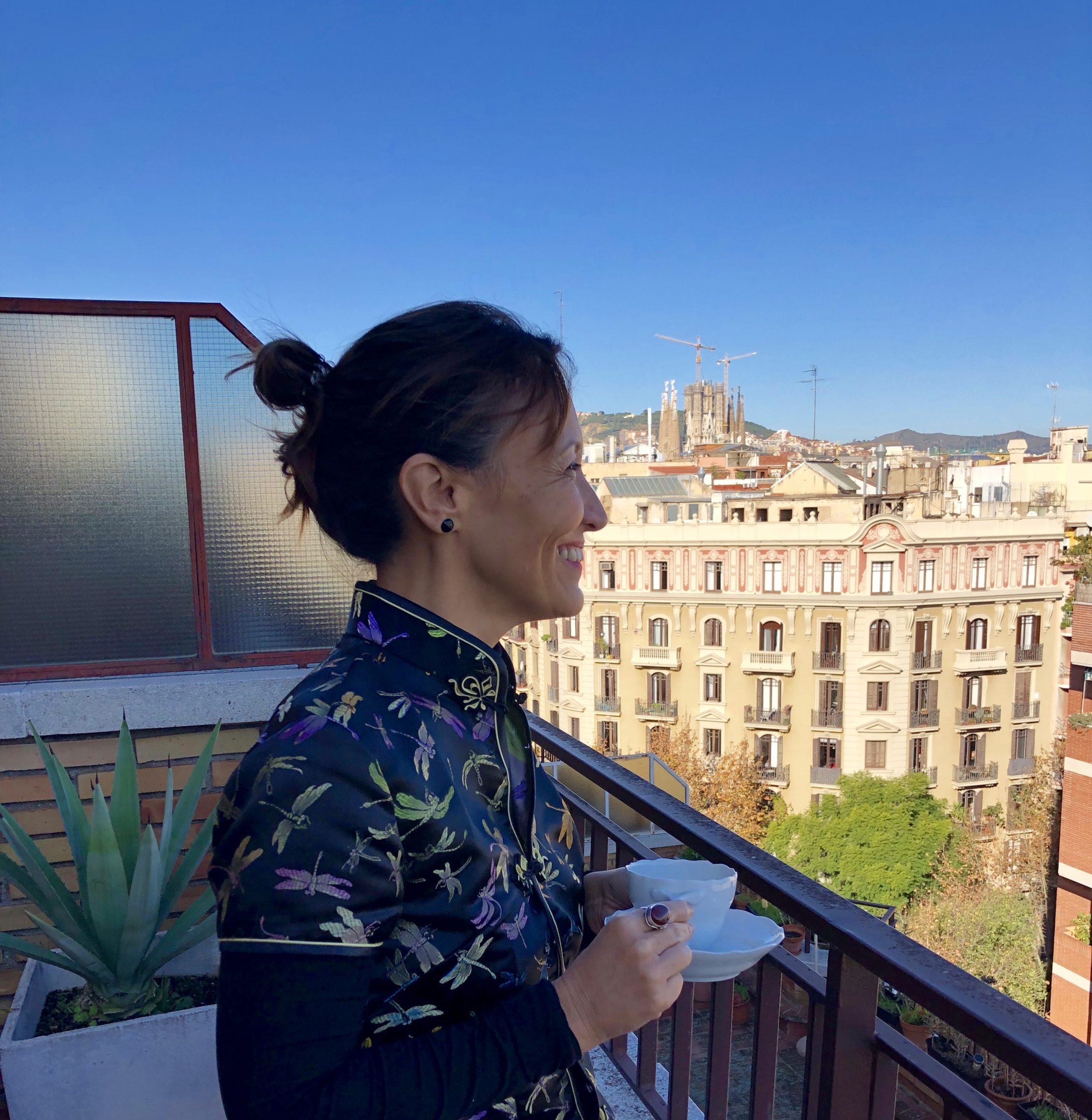 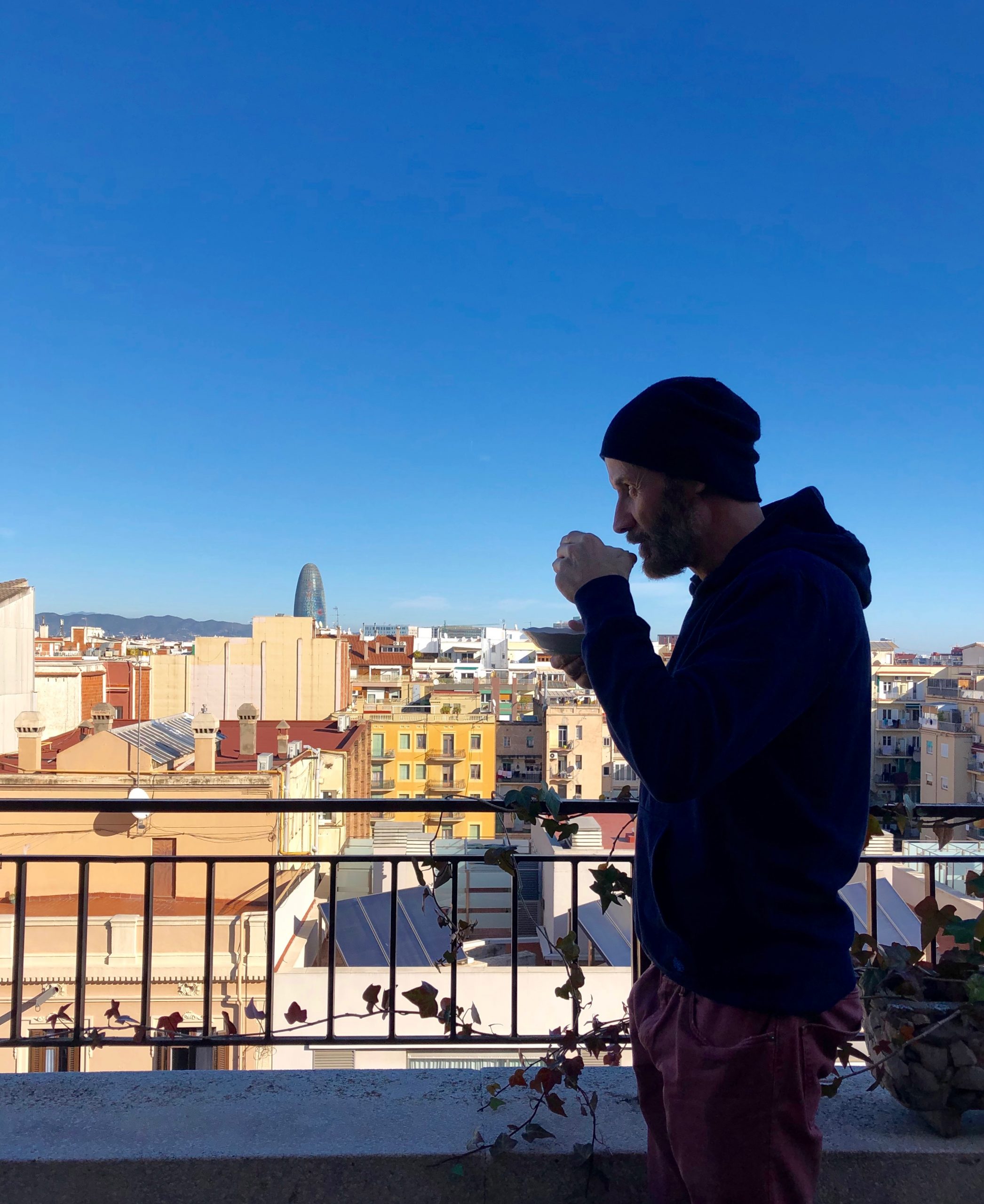 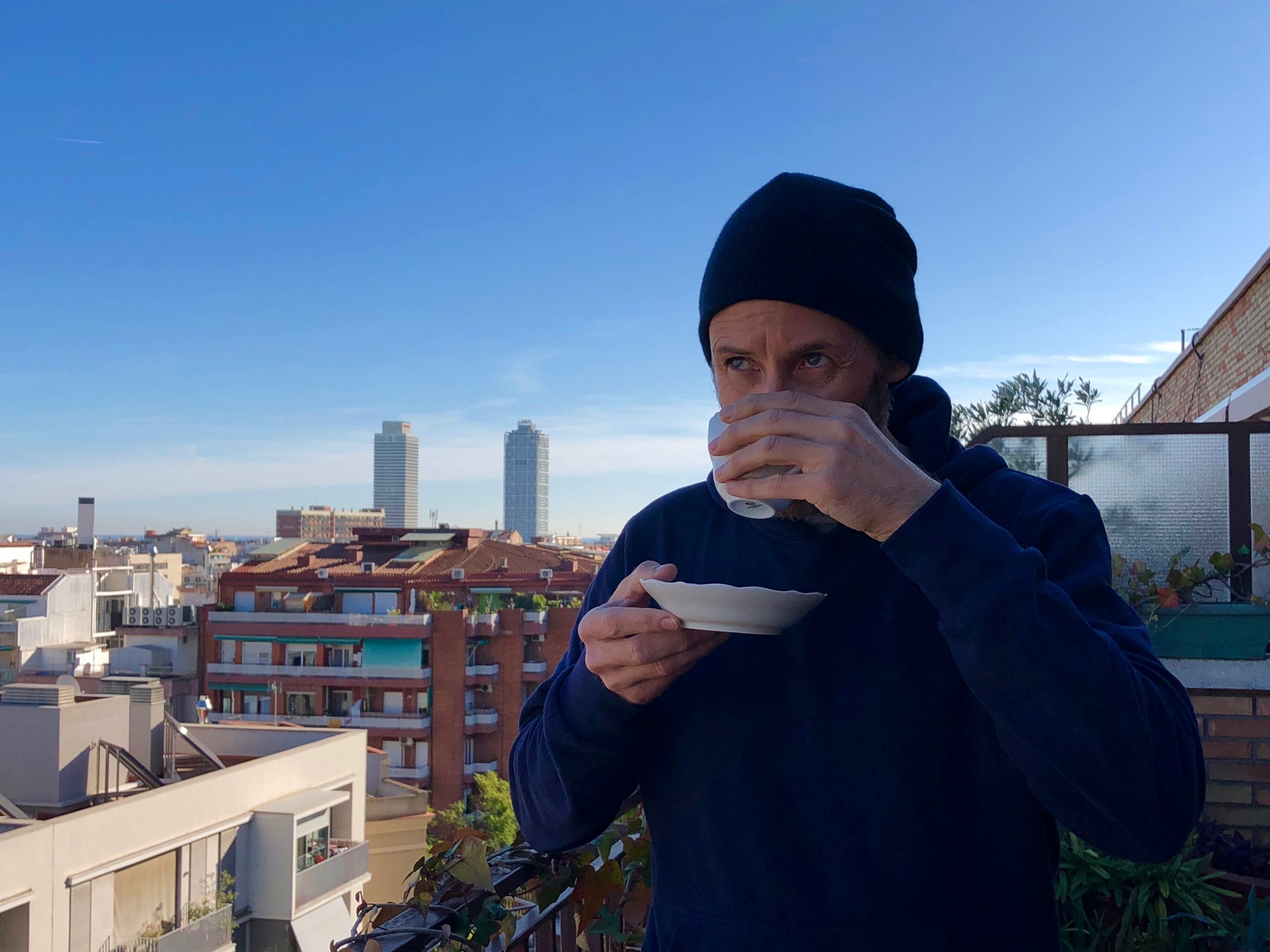